BASPSC celebrates 25 years since its establishment

Bulgarian Association of Supplementary Pension Security Companies (BASPSC) celebrated the 25th anniversary of its establishment. The event took place on September 13, 2022, at 6:00 p.m. in the Grand Hotel Sofia.

BASPSC was established in 1997 by PAC Doverie, PIC Saglasie, PIC Allianz Bulgaria, Bulgarian Pension Insurance Company, which in 2002 merged into PAC Doverie and PIC CCB - Sila, which are the first five companies in the country, with the subject of activity supplementary mandatory pension insurance.

During the years of its existence, the Association and its members are actively involved in the processes of preparing the legislation to regulate the activity, the reform of the pension insurance system in Bulgaria and the introduction of the supplementary mandatory pension insurance, as part of it, etc.

The role of supplementary pension insurance for the pension and financial system of the country and of BASPSC, as an association that represents this market, was emphasized in all the greetings that were addressed to the members of the Association - by the President of the Republic of Bulgaria Rumen Radev; Prime Minister Galab Donev; the Minister of Labor and Social Policy Lazar Lazarov, the Deputy Chairman of the FSC, Head of the "Insurance Supervision" Department, Diana Yordanova and Jan-Willem Bouma - Chairman of the Management Board of the Confederation of European Pension Associations "Pensions Europe".

In his congratulations to the members of BASPSC and the guests of the event, Ivan Neykov, chairman of the Balkan Institute for Labor and Social Policy and one of the leaders of the reform in the pension insurance system, as Minister of Labor and Social Policy in the period 1997-2001, emphasized the role of pension funds as one of the most powerful financial institutions and investors in the country. He recalled that if they had not been created, millions of Bulgarian citizens would not have had the opportunity to receive fairer pension incomes, and these nearly BGN 20 billion would have been spent without any visible benefit.

For his part, Nikola Abadjiev, long-time chairman of BASPSC and honorary chairman of the Association, reminded of the difficult and responsible way that the companies and the organization have been going through since its creation. He also did not fail to highlight the desire of the founders, (executive directors of the five pension insurance companies at the time) to unite in the name of common goals, which far exceed the individual market aspirations of each of the companies and the achieved, with much effort, positive results, both for the industry and for the insured persons and the financial system of the country.

Nikolay Vasilev, a member of the CFA association in Bulgaria and managing partner of "Expat Capital" and a minister in two governments in the period 2001-2009, emphasizes the need to increase the contribution to universal funds from 5 to a minimum of 10%, improve of the investment regime of the assets of pension funds and the urgent need to create multi-funds, an issue that has been waiting for its regulatory solution for more than 15 years. He also spoke about the need for deep reform in the first pillar so that the system can stop generating huge deficits to be financed by the taxes of Bulgarian citizens.

At the end of the event, Evelina Miltenova, president of BASPSC, once again expressed her gratitude to all partners, without whom the activity of the Association would not be possible and invited all the members of the Management Board to cut a festive cake.

BASPSC is a member of the European confederation (Pensions Europe), which is a union of 24 national pension associations of pension funds from 18 EU member states and four other European countries. 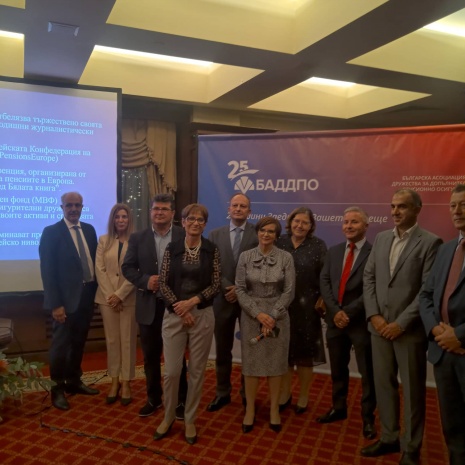