Cinematographer Rali Ralchev received the "Golden Eye" grand prize from the 11th Film Festival for cinematography. The jury of the festival awarded Ralchev for his work in the film "Don't get into an argument with the bathroom staff". The award for overall creativity went to cameraman Hristo Kovachev.

The international event, in memory of the legendary Bulgarian cameraman Dimo ​​Kolarov, took place within four festival days - from October 5 to 8, 2022, in his hometown of Popovo. PAC Doverie has traditionally supported the event since the beginnig in 1998.

The other winners of the festival's prestigious awards are:

Zdravko Ruzhev, for the film "With attention to detail" - diploma with "Golden Eye" plaque;

Stoyan Varadinov for the film "I did it for you" - "MAGIC SHOP" Production Company Award for a student film;

Kiril Prodanov for the film "Darkness" - Award of the Union of Bulgarian Filmmakers;

Boris Pintev and Dobromir Ivanov from BTV for the films "The Plate from Bitola" and "I am Burnesha. The Last Sworn Virgins of Albania " - Special Award for TV Documentary;

Galina Vasileva for the film "To the Last Caprice" - Special Award of the Municipality of Popovo for the best cinematographic debut;

Dimitar Mitov for the documentary "Destiny as Jazz" - the Special Award of Popovo Municipality for cinematography;

Vojcheh Todorov for the film "Life" - First prize of Popovo Municipality for cinematography.

The film festival for cinematography "Golden Eye" with international participation, in memory of Dimo ​​Kolarov - Popovo 2022, was organized by the Municipality of Popovo. Co-organizers are the Union of Bulgarian Filmmakers, UVT and the Ministry of Culture - Executive Agency "National Film Center". 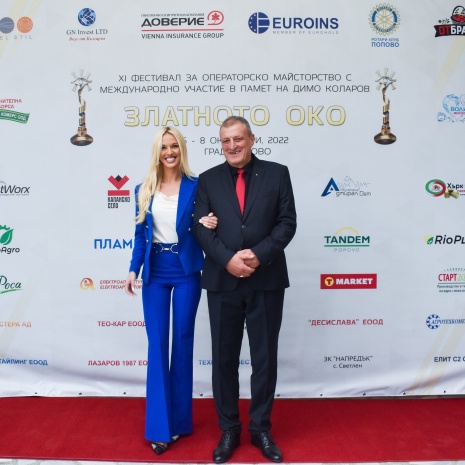