PAC Doverie participated with a specialized stand at the IX Congress of the Confederation of Independent Trade Unions in Bulgaria (CITUB), which took place on May 10-11, 2022, in "Inter Expo Center" - Sofia.

At the stand, which was fully technically equipped, delegates and guests of the congress could familiarize themselves with the Company's products and get answers to questions related to supplementary pension insurance. Dozens of them also took advantage of the opportunity to check the status of their individual account, calculate the estimated amounts of their pension payments, etc.

Minutes before the start of the congress, Plamen Dimitrov, president of CITUB, visited the stand and expressed his satisfaction that the two institutions continue to be together for 28 years.

As usual, the congress of the largest representative of workers in the country - CITUB, attracted the attention of politicians, trade unionists and public figures. Among his guests were the General Secretary of the International Confederation of Trade Unions - Sharon Burrow, the Speaker of the National Assembly of the Republic of Bulgaria - Nikola Minchev, the Vice President Iliana Yotova, the Ministers of Labor and Social Policy, Education and Science, Health, Regional Development and Public Works and other members of the government, representatives of the parliamentary parties; people's representatives from all parliamentary groups, representatives of employers' organizations, trade unions, etc.

"A national plan for a just green and digital transition is needed, in which all policies and strategies are combined in the environment, industry, transport, agriculture - sectors that will experience much stronger problems if they are not managed horizontally", emphasized Plamen Dimitrov in his speech. The current president of CITUB, received the trust of his colleagues and was re-elected for a new 5-year term.

CITUB is one of the founders of PAC Doverie in 1994. The Confederation and several trade union federations continue to have a minority share in the capital of the Company. During long periods of their joint existence, the two institutions have defended the rights of insured persons, the need for the development of additional pension insurance on a capital basis in the country and the adoption of better legislation for the implementation of the activity. 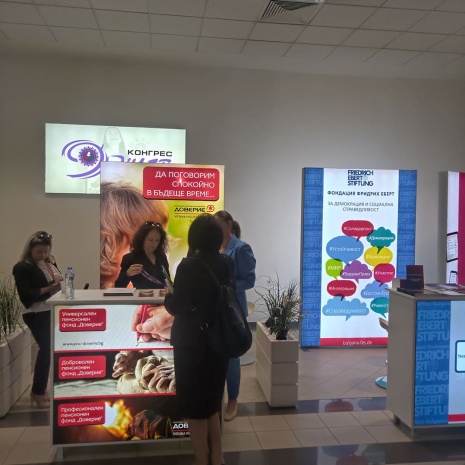