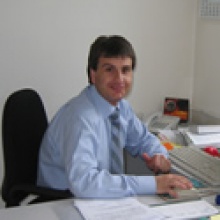 He started working in Pension Assurance Company Doverie" in 2002 as a Program Manager in the Marketing Division. Since 2004 he has been managing the legal department of the Company.

Prior to joining Pension Assurance Company Doverie, he worked at the General Labour Inspectorate and at the Labour Law and Social Security Directorate of the Ministry of Labour and Social Policy. As an expert at the Ministry of Labour and Social Policy and later as a consultant to the Pension Reform Project of the United States Agency for International Development, he participated in the working group on the drafting of the new social security legislation.

He graduated from the Law Faculty of Sofia University St. Kliment Ohridski. He has level B1 knowledge of English according to the Common European Framework of Reference For Languages.